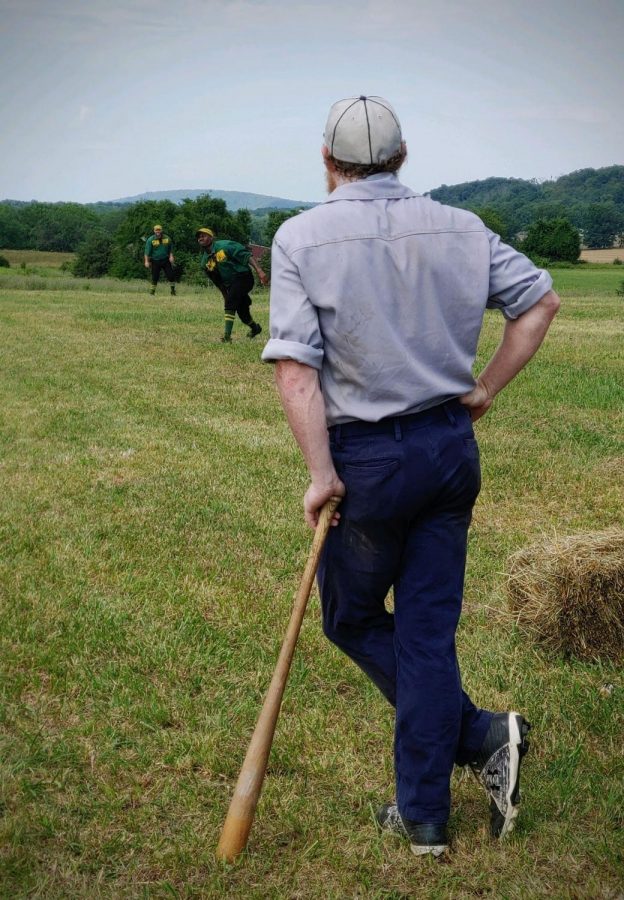 The Gettysburg National 19th Century Baseball Festival was a free event meant to get the community involved and educated about vintage baseball at the Schroeder Family Farm in Gettysburg, Pennsylvania, on July 17 and 18.

There are many differences: no gloves, underhand pitching, and outs when balls are caught after one bounce. Games are played on wide open farmlands and not on cleanly cut fields.

This is how baseball was played in the 1860s, and this is how it’s still played by a select few from all over the country.

John Kilpatrick or “Killer” as he is known on the field is one of those men, keeping the sport alive.

Kilpatrick had a career in baseball and loved the sport, but when his career came to an end, he didn’t want to quit playing. Coed softball, however, wasn’t cutting it for him.

So, he reached out to Bruce Lee, the owner of the Eclipse Base Ball Club of Elkton, Maryland, a vintage baseball team, to tell him he was interested.

He went to one game, and Lee put him on the field that day. Kilpatrick said he instantly fell in love with the sport.

“You won’t go back to modern baseball,” he said.

The games are fast paced and exciting. Back in the 1860s, they played to exercise, Kilpatrick explained, and the only way to do that was to hit a lot and run a lot.

As a result, during games, the umpire wouldn’t call strikes or balls unless the pitcher wasn’t throwing good enough pitches to hit, or the batter wasn’t swinging. In fact, walks and strike outs are rare in a vintage baseball game.

And that’s how the game should be played in Kilpatrick’s eyes.

Kilpatrick is now the Vice President and Co-Coordinator of the Eclipse. He plays 20 to 40 games with his team throughout the season.

Kilpatrick, also a 5th grade Science, Math, and American History teacher, even brings his students to see his games.

And that’s what fans got to experience this week at the Schroeder Family Farm: living history.

Twenty-five teams from across the country come to play three games over two days on 25 acres of farmland: Pennsylvania, New Jersey, New York, Delaware, Michigan, Tennessee, Rhode Island, and Connecticut. There isn’t anything modern to see at the festival except for one telephone pole on the farm.

This is why the games are played. It’s for the community.

Little Leaguers help with parking and have donations boxes out for their team. This festival alone brings in enough money to help them nearly cover their entire season.

Plus, it’s a chance for families to have a free event to come out and learn history. Something, Kilpatrick believes that’s hard to find in modern society today.

And that’s what he loves about this sport.

Kilpatrick believes this idea of community is what baseball should be about, because in the 1860s, that’s what was so amazing about this sport.

It brought people together with views so opposite in nature it resulted in all-out war. The Union and Confederate forces, during the Civil War, would put down their weapons at night and in the middle of heavy fighting, to play a ball game.

This is the spirit of the game these players from around the country are trying to keep alive.

So, on July 17 and 18, people will have that one opportunity to see history before their eyes, and while Kilpatrick says, spectators may be fooled into thinking they’re just playing baseball, this sport is far from the modern-day sport they’re so use to today.