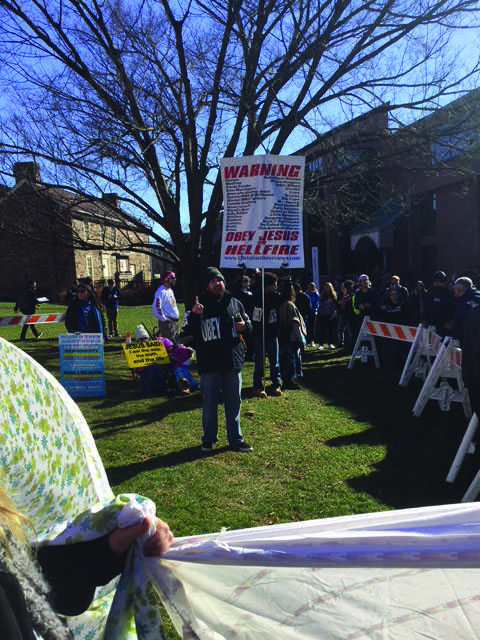 A group of Christian activists made yet another demonstration on Bucks’s Newtown Campus, after two previous appearances that rattled administrators and students alike
“I am here to give you the message, to give you the hope, to give you Jesus! Let’s make it as simple as possible: Obey Jesus or go to hell,” the lead protestor stated, among many other proclamations.
Asked to identify himself, the protestor answered, “My name is the Radical Reverend, and you can follow me on Instagram.”
Several other members of the Christian group were also present. The Reverend’s wife, who answered questions from women in the crowd, denounced the LGBTQ community, stating that she aimed to “save the lost, and get the LGBT community back in the closet.”
The Reverend’s children also made an appearance, baring signs relating to their sect’s belief. One of the adult protestors also held a towering sign, with words describing various groups of people as hell-bound. Many students described this sign as a replica of the one torn down by activists during the first protest.
According to Charlie Groth, a professor of anthropology at Bucks, the protest group has also shown up at other universities and colleges around the area. One onlooker recalled a similar protest that occurred at Temple University.
However, these visits have been a novelty for many students. “I’ve been here for two years and I’ve never seen this sort of thing before,” as said Ryan Fuller, a sophomore at Bucks.
Reactions varied from person to person, but the majority denounced the protestors or simply laughed at their message. Some feigned annoyance to the activists, theorizing that they would go away if students ignored them. Other students were disturbed as they heard the man shouting through his megaphone.
A group of students responded by taking up action against the demonstrators. For a short period of time, a number of counter-protestors emerged with their own sign. One student arrived with stereo speakers and played what seemed to be hip-hop music. Additionally, many professors and students chanted slogans, most likely in an attempt the drown out the man’s voice.
Among Christian students, the protesters’ message was met with various criticisms. Some students felt that it was the opposite of what they were taught, and others complained that the Reverend’s method of delivering his speeches were divisive.
After preaching in the courtyard for about three hours, the Radical Reverend began accepting questions from the audience. When one student approached him, questioning his beliefs, the protestor replied, “I’ve always been fascinated with serial killers; what happens with a man’s mind……. After studying, I came to find that most of these murderers were tied up with atheism.”
Asked what separates his group from the Westboro Baptist Church, a Christian sect that is regarded by organizations such as the Southern Poverty Law Center as a hate group, the Reverend responded, “We support the military, and our signs are way cooler.”
The Reverend was also questioned about women and their role in society. While he claimed to be supportive of women, he also said that he did not consider himself a feminist. A few women in the crowd rolled their eyes in response, while other students hurled insults at the activists.
The groups targeted by the protestors as sinful included “mama’s boys, so-called Christians, witches, and gamers.” When asked about the inclusion of gamers on this list, the Reverend replied, “When you start playing video games, you start living through these video games, in fantasy. Your brains are being washed in a bunch of garbage.”
The Reverend’s children wrapped up the protest by singing a song related to the group’s faith. Before they left, the speaker for the group claimed that they would return every day for the rest of the week. However, they did not follow through on this promise.