Veteran reporters tell students that journalism is alive and kicking 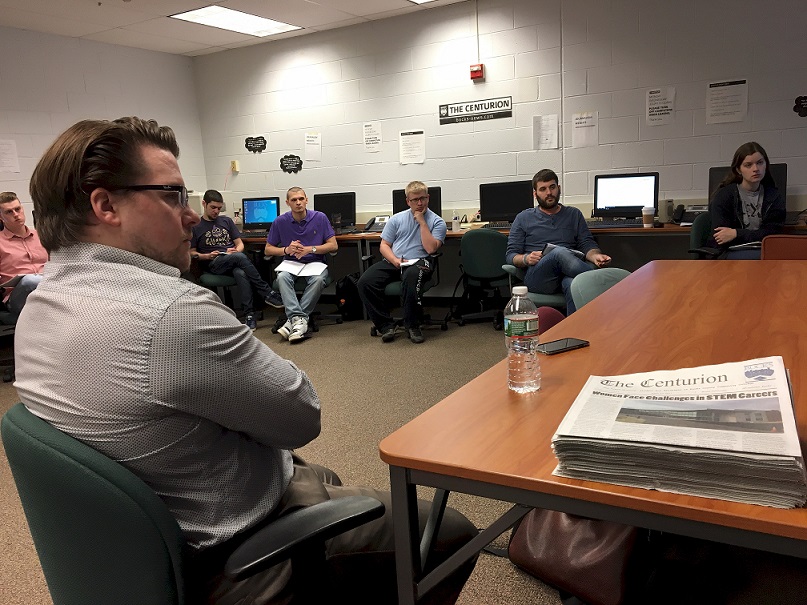 Tom Sofield, a recent Bucks graduate, is already a successful entrepreneur. Although he has worked at major national corporations, his company is located right in the heart of Bucks County. His start-up, Levittownnow.com, was founded in 2013, and has recently been joined by a sister website, Newtown Now. His occupation? “It’s the only profession where one minute you are talking to a drug dealer, and the next you are talking to the police, and you don’t get in trouble.”

Sofield is a journalist, and along with seven other members of his profession, was present for a series of intriguing journalism forums held at Bucks’ Newtown campus in the Centurion’s newsroom on April 17 and 18. And although some have the perception that journalism is a dying art form, those present would disagree.

“What we do in this field of journalism is critically important, now more than ever,” said Freda Savana, a veteran reporter who has worked in the business for 30 years. Case in point: the journalists presenting have been on the scene for national events ranging from the Orlando terrorist attack to Donald Trump’s campaign rallies.

“I got into journalism because I liked to write,” said Jarrett Renshaw, a reporter for Reuters who covered the Orlando shooting. “What better way to travel, write, and get paid at the same time?”

The forum was host to journalists of all types, from hard news reporters to sports commentators on WBCB radio.  Some start work at 5:00 in the morning, while others are only warming up at 7:00 in the evening. However, all of them brought passionate and engaging stories to a collective audience of over fifty students, as well as tips for those wishing to get their own feet wet in the profession.

One common piece of advice was to write stories for the student newspaper, either at Bucks or after transferring. “It’s like credit,” Renshaw explained. “You want to get a credit card, and you have no credit history. How do you prove you’re creditworthy? You have to have clips, you need to generate something that demonstrates what you’re doing.”

Tommy Rowan, a staff writer at Philly.com, said that those wishing to go into any career should use their time in community college to “find out what you want to do.” “The best way to go is to find a professor, and make yourself known to that professor.” Rowan, who went to Temple University after graduating from Bucks, explained that many of the adjunct professors at Temple are working journalists.

Another former Bucks student who is now working as a journalist, Anthony DiMattia, was able to get an internship out of college at the Courier Times. A 2012 graduate, he got a job as a copy editor just one year later.

During the three forums, speakers demonstrated the drama of reporting, describing various events that they have covered. Renshaw was in the middle of moving when his editor told him to fly down to Orlando to report on the terrorist attack there last year. “Our first mission is to find out who the victims are. You go knocking on doors.” Many families were too distraught to talk about the event, he said.

Rowan explained the political dynamic of covering a major city. “[Politicians] get power-hungry. Bigger city, bigger playground, bigger paydays.” “The only thing you can do is find people and talk to them.” “If you write a story that helps other people, that gets laws changed, there can’t be anything better than that,” DiMattia said.

When asked, Savana that tales of hoarders were among strangest stories she has written. “They are interesting, but they are really weird.”

Other reporters stressed the occasional difficulty of the job. “There are times when I have a camera in one hand, a phone in the other, while trying to tweet about it on social media!” exclaimed Michele Haddon, who works at the Doylestown Intelligencer. “Sometimes I knock on the door and think, “Please don’t be home!” But we have a job to do.”

Haddon also mentioned the importance of being prepared as a journalist. “Pens don’t work very well in the cold, so bring a pencil. I always have a pair of rain boots. Keep extra notebooks. In the winter, I kept snow pants.”

“You just have to stick your phone in somebody’s face and do it,” said Charlotte Reese, a journalist at WBCB 1490 AM. If you want to be a journalist, just tell yourself, “I’m a journalist.”

For Sofield, technology is the biggest challenge – and opportunity – facing young journalists today. “Analytics have totally changed the game. A lot of stories we journalists think are important, many people don’t care about.”

The company that he used to work for, Gannett Media, is currently trying to get journalists to build their own personal brands based on their lives as journalists, not necessarily as writers for Gannet. “They want people with an active social media presence, not someone who is tweeting out nudes,” he laughed. After all, there are some things even a journalist can’t get away with.