Pastor Aden Pays Yet Another Visit to the Newtown Campus 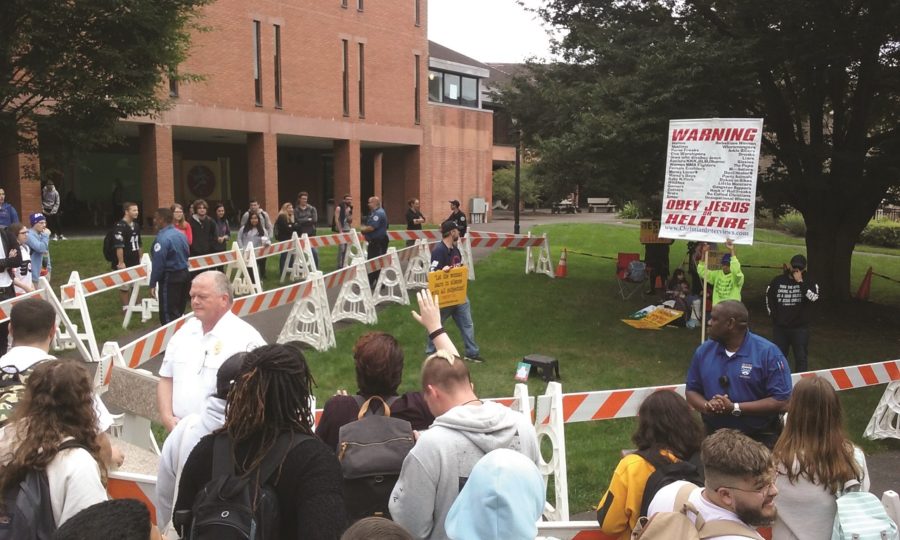 Students were horrified and upset on Sept. 24 when Pastor Aden and company visited the Newtown Campus, insulting passing students and screeching obscenities at the top of his lungs.
Campus security spent the morning setting up barricades in preparation for the infamous preachers visit.
Pastor Aden leads the Key of David Christian Center, which is a non-denomination Christian church.
He has been visiting Bucks for the past three years. Just the mention of his visits to a professor or student draws a grimace or nervous laughter.
Minutes before noon, there was an eerie feeling to the air. The barricade was all set up as police and students anxiously waited for the pastor to arrive.
This nervous anticipation was broken when Pastor Aden was seen walking down the hill toward the barricade at 11:54 a.m., with six other members of his church carrying signs and wore shirts with vulgar messages on them.
Among the seven people were the pastor, three other adults, and three children. They placed their belongings in the closed-off barricade and started lifting the signs up in the air.
Pastor Aden was wearing a shirt that included an anti-gay symbol, with the words “Obey Jesus” underneath the symbol. He was also wearing a hat that read “I love haters.”
It wasn’t long before a crowd started to form. Pastor Aden started off by shouting at everyone in the crowd, using sexist and anti-gay obscenities.
“I’ve heard rumors of there being wh**res and homosexuals on this campus.”
This and many more of his insults were met with outrage and anger by the crowd. Police officers stood between the barriers, blocking students from entering the blockade.
Security Lieutenant Bill Torpey explained that the barricade was to protect the students, not the pastor. “We don’t want any students to jeopardize their education because of a hateful man.”
Pastor Aden continued to hurl more sexist remarks at the women in the crowd, drawing boos and curses. The pastor used a banana to point at the people he was addressing.
“God wants girls to make babies and learn how to cook,” Aden said taunting the crowd.
Unlike the eerie, cold atmosphere from before, the crowd’s anger had boiled the air. Students took turns returning his remarks with vulgar phrases.
“Don’t curse in front of my children!” reprimanded Pastor Aden, who had been shouting expletives for the past half hour.
The pastor spoke about illegal immigrants and Muslims, going on to ask the crowd if there were any in the crowd but, nobody in the crowd spoke up.
“Oh, there are no Muslims here? Well, I guess we don’t have to worry about any bombs going off!”
This remark was met with unanimous disapproval from students.
At one point, he pointed to a black student, yelling. “If the cops tell you to hold your hands up, you hold them up or you get shot!”
These attempts to draw reactions from the students in the crowd succeeded, and the anger had finally boiled over. Many in the crowd screamed at him, others started chants however, they would die off in minutes.
“Boring, boring, boring!” was such a chant. It drowned out the pastor for a moment before he turned around to grab a sign.
“Stop acting like children” was written on the sign he held up.
A student jumped onto a nearby bench and tried to disperse the crowd.
“Don’t interact, just bounce!” he yelled at many unhearing students. “What else are you going to do, you are just feeding into this!”
Taylor Stevenson agrees with his sentiment. She said, “Pastor Aden is just here for a reaction.”
One saddened Bucks employee went on to say, “I wish they would see his attempts to stir up negativity.”
Just before 12:30 p.m., Pastor Aden stopped preaching and switched with another adult wearing a black hoodie. This preacher was similar to Pastor Aden.
Alissa Manning was watching from afar, afraid to get close to the crowd and pastor. She said, “This is disheartening, it’s a clear disruption of peace.”
She continued to say, “It is sad.” She pointed out the daughters and mourned, “I feel bad for the daughters seeing this chaotic scene.”
Pastor Aden had brought along his two young daughters. Both were sitting next to each other, playing with sticks and grass around their chairs.
This went on for the afternoon, Pastor Aden and company holding up signs and yelling at students to draw a reaction.
Many students skipped classes to view this chaotic scene, and many students were encouraged by this atmosphere to do outlandish acts.
One student stole a sign from nearby. He paraded it around the barricade with cheers from students. The sign read “hate has no home here.”
Another student asked for a face to face conversation with Pastor Aden, hinting at wanting to fight. The pastor goaded him into becoming enraged and tearing off his shirt.
Students even began to argue amongst each other, threatening to fight. Others wanted to jump into the barricade and hurt the pastor.
As the afternoon progressed, the crowd finally began to dwindle, and the pastor left. What left in his wake was a defeated peace, upset students, and a charged atmosphere.
When asked how students should fight this outrageous event from ever happening again, Alissa Manning said, “I think students should e-mail the school and explain how they feel about this.”