Professor Queeney Talks Fake News and How to Best Avoid It 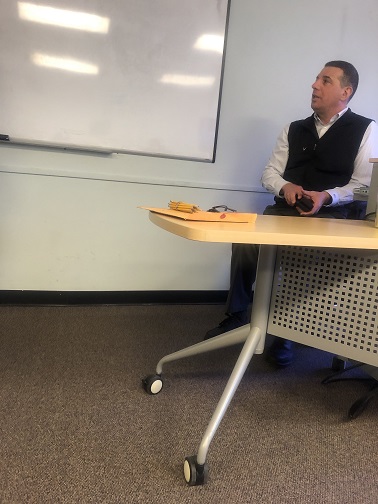 The wild spread of misinformation, especially online, is one of the biggest problems in recent history that Americans face on a daily basis.

The terms “fake news” and “misinformation” have become widely recognized throughout Donald Trump’s presidential campaign and eventual presidency. Trump typically used the term “fake news” to describe any article or news outlet that covered him critically.

But to grasp what exactly fake news is and how to avoid consuming it, communications Professor Shawn Queeney recently offered his thoughts on both.

According to Queeney, “Fake news is really this suspicion of legitimacy, it’s meant to give this idea that journalistic practices… that all of that lacks legitimacy.”

Essentially, fake news is less an object and more the calling into question of objective factfinding, reporting verification, the editing process, and confirmation of sources.

Misinformation tends to be a simple mistake in writing that can be later called out and corrected where the reporting source takes accountability, whereas fake news generally calls all of journalism into question.

“We’re all prone to make mistakes, it’s an imperfect process,” said Queeney. “But the whole fake news idea, it’s just to call into question the legitimacy of it without presenting clear evidence. I always like that section of the newspaper, where they say, ‘Oh here’s a correction from a story we made yesterday.’”

Queeney offered tips to ensure that we’re not only reading from reliable news sources, but also being responsible in how we consume news.

“I think transparency is a big deal, and it goes back to this idea of information literacy that we teach at Bucks. Is there a clearly identified author? Is it clear where they got their information from?”

Often times, it does come down on the reader to look into the news sources that they trust. Confirming that they’re identifying their sources and looking into the subject further beyond the article at hand are only a couple ways of making sure that we’re consuming trustworthy information.

“In many ways, that’s the upside to the internet – having access to that, and being able to conduct research on our own. When we’re using the internet that way, we start to generate better thinking.”

Another common occurrence is when readers discredit a source because of bias. Both conservative and liberal readers claim bias is present in a variety of mainstream news outlets. But as long as a reader is able to sufficiently question their news source and recognize that bias, big-name news sources tend to be safe to stick to.

Queeney named The Economist, The New York Times, and local papers as sources that tend to be trustworthy.

“Don’t get too caught up in the bias, basic critical thinking skills, how transparent is this, can I verify this information… at some level, we have to trust our own judgment as to whether something is factual,” suggested Queeney.