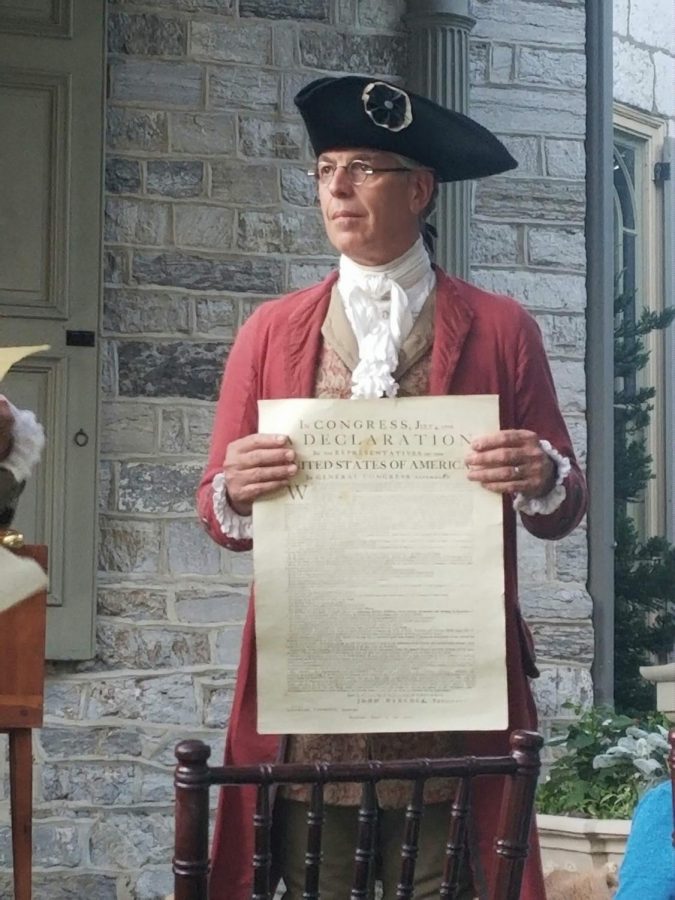 Re-enactor David Biser holds up the Declaration of Independence for the audience to see.

The Historical Society of Dauphin County continued its 11-year July 4th tradition of reading the Declaration of Independence on the porch of the John Harris Jr.-Simon Cameron House, the home of the first resident of Harrisburg to celebrate the importance of this moment in history. This document was originally read 245 years ago on the same front porch of this house.

This year at the event they had two reenactors reading different parts of the document: Ben Franklin and John Harris Jr., the son of the first man of Harrisburg. A frontiersman also joined the crowd. He was barefoot, clothed in fur skins, carried a rifle, and would occasionally interject with loud shouts of, “Death to Tyrants!”

In addition to the actual reading of the document, Harris and Franklin answered questions about the Revolutionary War. They also talked about what life was like then and the importance of frontiersmen.

Harris explained that he made his money from such men. They would spend their life hunting and bringing him furs. Since Harris had the trade connections, he would pay the frontiersmen and then sell the furs for a profit in Philadelphia. From there, the furs would be shipped all over Europe.

However, for John Harris Jr., who was played by David Biser, the most important part of the evening was the actual reading of the Declaration of Independence.

He felt it was an important event, because at the time of the Revolutionary War, not too many men or women could read. He thought people should hear the Declaration of Independence as the people of the 1700s would hear it.

And 245 years ago, that is how the people of Harrisburg learned about independence. John Harris Jr. stood on the front porch and read the document to the city.

The actual Harris was an interesting man.

He was not a patriot at first, despite serving in the French and Indian War and interacting with Washington. Harris voted against the Declaration of Independence in the Pennsylvania State Congress because he did not see all the problems occurring with Britain.

However, he realized that was not the way America was headed, especially with Ben Franklin heading up the Pennsylvania delegation in Philadelphia.  Most supported Independence from Britain. So, Harris decided to change his tune.

He donated 3,000 pounds of his own money to the Revolution, which was a significant amount of money as the average wealth of most families at this time period was about 100 to 300 pounds. Biser said it is his belief that Harris would’ve used his supply business to aid the Revolution as well, though whether he did is not certain.

What is certain is Harris didn’t fight in any battles. He was given an honorary commission, but at the time of the war, he was 50 years old and could not fight.

Biser said he enjoyed learning all these facts about Harris.

“You have to know all these neat little things about this character you’re portraying… It’s about letting the person live through you. It’s intense,” he explained.

Yet Biser loves the job he does. He’s been a Revolutionary War re-enactor for 20 years, and he looks forward to portraying John Harrris Jr. every year at the Fourth of July event.

Even though Biser said they still had the event last year despite COVID19, he was excited for a bigger turn out this year and for a chance to read this famous document for a fourth time.