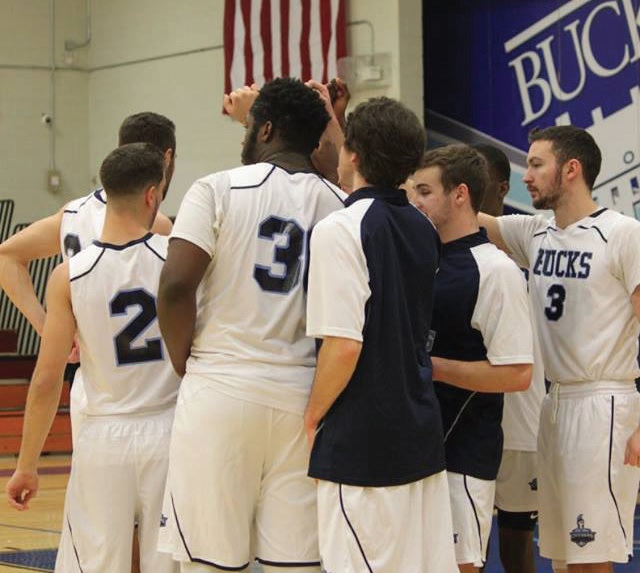 The Bucks men’s basketball team capped off a strong finish to the season with a postseason run, although a battle with Union County College ended their dream season.
Unfortunately for the team they were defeated by Union County College by a score of 80-93 and could not get the job done. That puts an end to a great finish to the season and eliminates the Centurions from the playoffs.
Bucks finished very strong, ending their season winning six of their last eight games, crafting a successful year after all the adversity that hit in the beginning of the season.
The Centurions winded up finishing with a 12-12 overall record.
The team started off with a 2-7 record that winded up being a solid finish, the team began rolling with a three game win streak heading into the winter break.
“It started off not as planned, I thought we would be better early on.” Head Coach Dominic Farrello said. “But we exceeded expectations in the second half of the season.”
Farrello was expecting to finish .500 or better this season, by finishing off the season as strongly as the team did, they finished at the threshold of what he was aiming for.
Before the season started, Farrello was expecting to make the playoffs saying, “I thought with our roster we had a chance to make playoffs.”
A key this season as Farrello states, is the ability for the team to balance discipline and fun. That is something that he feels Bucks excels at every year.
Even though it is only his second season coaching, Farrello feels he has won the players over with this style of coaching. Farrello believes it brings a winning mentality, but also keeps it fun at the same time.
Farrello feels he has applied all of these skills by saying, “By keeping practice, games, travel, and team functions enjoyable and educational for players.” He added, “We make sure to get as good at basketball as possible within the allotted time frame, but we make sure it is enjoyable all season.”
Of course this all could not have been done by just the coach, the players are just as important and probably the biggest part to this team.
Farrello describes the best player on the team, Somah Slewion, who was the key driving force of the team throughout the whole year.
Farrello said they he expected Slewion to step up and be a key part to this team and he delivered, just that like coach thought he would.
Slewion averaged a spectacular 22 points per game, five rebounds, and four assists per game.
Passaic, Mercer, Northampton, CCP, and Camden winded up being some of the hardest fought games for this Bucks men’s team this year.
The toughest game this season was against CCP, which was a score of 100-76.
Farrello talked about the game by saying, “We got outplayed from the jump.” He added, “They were a much better team from start to finish.”
The Centurions game against Del Tech Stanton had a rough start, down 23 at half. But, ultimately the team fought hard and came back to win the game by three, in what was arguably their best win of the season.
Farrello remained unsure with what he expects the team to be like for next season. The Centurions are moving up to a higher division, but are also expecting to have more experience as a roster.