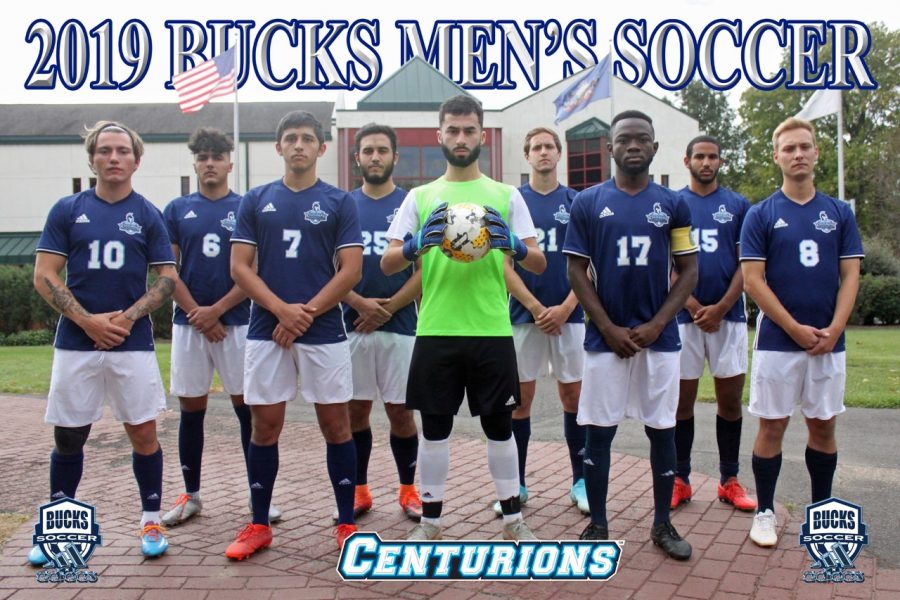 The Bucks Men’s Soccer team kicked off their season in early September and they have a long road ahead of them. The Centurions came hot out of the gate with a 6-0 victory over Penn St. Scranton.
“We started out very quickly today and so I was very pleased with that,” said Head Coach Justin Burroughs, “We still have areas we definitely need to work on but today was a good start to the season.”.
This hot start did not come to last, as the squad would go onto lose the next three out of four games to Berkeley-NJ, Camden County College and Delaware County Community College respectively.
The Centurions did snap their three-game slide in dramatic fashion with a 2-1 win in double overtime over Manor College on Tue Sep. 21. Salim Salan’s (Fr. Bristol, Harry S. Truman) first goal of the season could not have come at a more opportune time as he secured the victory in double overtime.
“It was a hard-fought game between evenly matched opponents; it could have gone either way,” said Coach Burroughs following the victory, “I have to compliment both our (goal)keepers doing a great job and it was nice to have Chris (Clark) on the field again, he was everywhere today.”.
The season has not started out the way they could have hoped, dropping to 2-3 despite out scoring their opponents 12-9. In an interview with Coach Burroughs, he said, “We have a lot to work on. Mistakes are killing us, and our fitness level just isn’t there right now.”
This is the first year the Bucks Soccer team has spent in their new league which sees the likes of Penn State Scranton and Berkley-NJ, who are nationally ranked. New year, new league, and a lot of new faces for the Bucks team. In fact, only Christopher Clark (Jr. Morrisville, Pennsbury) returns, who found a new home as goalkeeper this year.
While not the start we were all looking for, there were many setbacks that the team had to overcome to get to this point. “Our biggest loss has been our time together. We have basically a whole new team and haven’t been able to meet a whole lot.”. The impact COVID has had on this year’s team has been monumental.
“It is in the rules that we weren’t allowed to meet, so we were trying to rush to get ready for the start of the season.” Having a brand-new team and extraordinarily little time to prepare has presented a lot of challenges for the team.
“Without a lot of starters returning, players seem to be unsure of their roles,” says Burroughs.
Even though it hasn’t been a great start for the soccer team, coach Burroughs sees areas in which they can improve to get the season turned around. “Fitness and Chemistry are big. Those are areas we must improve in.”
Coach expressed a big interest in improving in free kicks and corners as well. These are things that can absolutely improve as the chemistry and conditioning get up to par.
Time, or the lack of time, seems to be the theme of this year’s team. The Centurions look to move past their mistakes and on towards the future.
The schedule gets more favorable from here, and the changes that coach Burroughs looks to make have to make you feel comfortable with direction of the team this season. Next up for The Centurions is Montgomery County Community College on Tue Sep. 28 at 3:30 p.m.