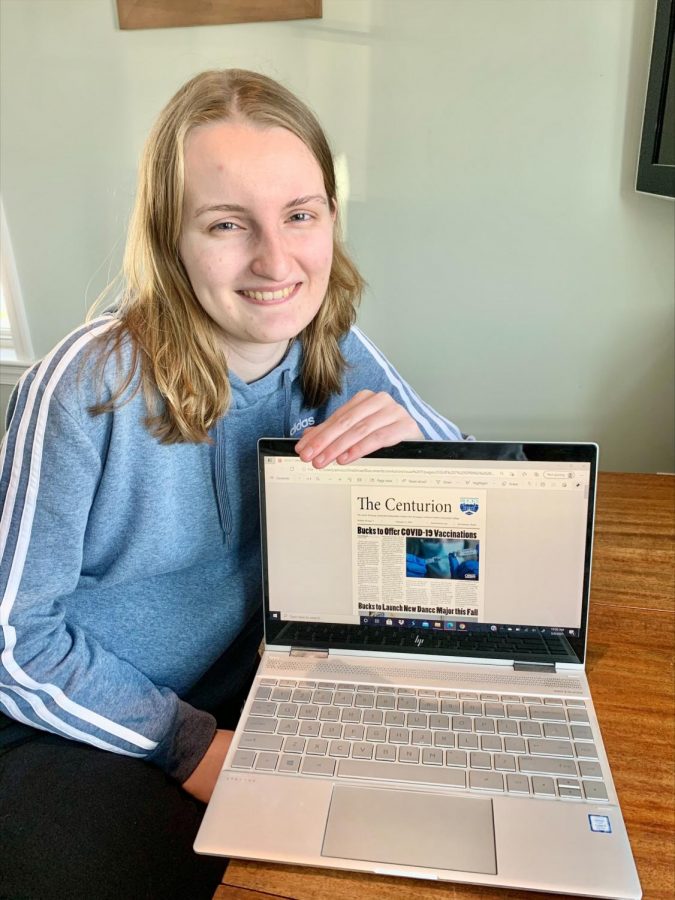 At the student clubs awards ceremony last Spring, clubs and their members were honored for continuing to operate even in the darkest days of the pandemic.
“For an outstanding job during challenging times,” says Director of Student Life and Athletic Programs, Matt Cipriano about the students who received 32 awards at the 2021 Student Involvement Celebration.
Through hard work and innovation, they kept a third of Bucks’ 45 to 50 organizations and clubs open. The Centurion, the Future Teachers Organization and Honors at Bucks. all won Organization of the Year.
The Centurion experience is one example of how it was done.
“I think the Centurion won because it never missed a beat and kept right on publishing even during the most difficult year the college has almost certainly ever faced in its history,” said journalism Professor Tony Rogers. “It did so with a very small staff, given the drops we’ve had in enrollment, and without the ability to use our newsroom, meaning everything had to be done remotely.
“From the writing of the stories to the editing and layout, everything had to be done outside of Rollins 127, which is normally our base of operations. By far the majority of the credit goes to the editor in chief, Alyssa Moore, who almost single-handedly edited and laid out much of every issue,” says Rogers.
“I had a lot of technological issues in the beginning, partially from me trying to remember how to make the paper, and partially because the Adobe suite was trying to kill my laptop. The journalism room at Bucks has everything there and had a system going, so trying to replicate that system was probably the most difficult part,” says Moore, 20, the 2020/21 Centurion Editor-In-Chief, now a journalism major at Temple.
“I had a few helpers throughout the past year. Dakoda Carlson (editor), Olivia Ruddell & Kristin Reuter (graphic designers), and Gabby Pirmann who is the current editor-in-chief, to name a few. And Tony Rogers, of course,” Moore adds.
“Everyone deserves some credit, including the journalism students who wrote the articles and helped with the editing, the students in the news video class who produce the videos on the Centurion’s website, and the graphic design students who helped with layout. Graphic design Prof. Michael Kabbash has been very helpful in providing some of his students to help in that regard.”
“The fact that last spring the Centurion won a record 17 awards in the statewide Keystone College journalism contest shows that not only were the students getting the paper out, they were doing very high quality work,” Rogers added.
“It was a new thing we were doing with the paper, so we just had to test it out and see what worked and what didn’t. It was nice having the editors and graphic design students help out as well as they took some of the weight off my shoulders, and did a pretty great job themselves,” Moore added.
“We are very gratified to have won the award and also congratulate all the other student clubs who won awards as well,” says Rogers.
Here are the 2020/21 awards:
COMMENCEMENT SPEAKER: SAMANTHA GILLESPIE
PRESIDENT CUP WINNER: BLAKE CHURCHILL
OUTSTANDING CLUB ADVISOR: DEBORAH HOELPER & STEPHEN DOCARMO OUTSTANDING MEMBER AWARD: BENNETT ANILOFF & KRISTEN SONNIE OUTSTANDING OFFICER AWARD: ALYSSA MOORE, CHRISTIAN HUBER, JENNA MODICA, MATT YOUNG, SKY HUNTLEY, & SAMANTHA GILLESPIE
PHOENIX AWARD: [email protected] & BLACK STUDENT UNION CLUB
OUTSTANDING VIRTUAL PROGRAM: STUDENT GOVERNMENT ASSOCIATION, KINESIOLOGY & SPORTS CLUB, & DISABILITY PRIDE CLUB OUTSTANDING COMMUNITY SERVICE EFFORT: PEYTON HEART PROJECT & [email protected]
ORGANIZATION OF THE YEAR: CENTURION NEWSPAPER, FUTURE TEACHERS ORGANIZATION, & [email protected]
BUCKS+MOST ENGAGED: AMBER FULLER
BUCKS+RECOGNITION: 10. IRINA KORZOVA, 9. DEANNA HACKENMEISTER, 8. DHRUVIKA PATEL, 7. SAGAR PATEL, 6. MARK MCCUNE, 5. ANNA SCHAFER, 4. KELLY SASSER, 3. BRANDI SCHMITZ, 2. IVY FAULKNER, 1. AMBER FULLER