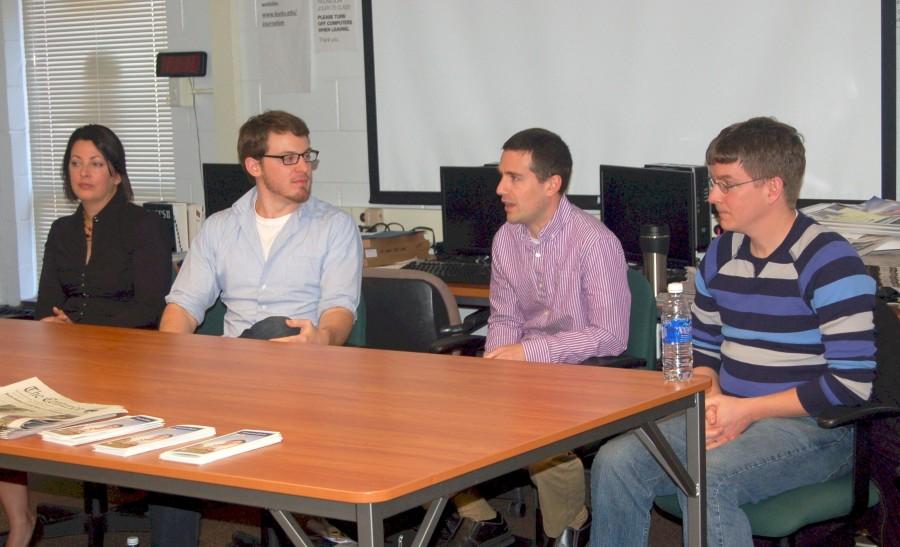 Bucks students and aspiring journalists gathered in the Centurion newsroom Thursday morning to learn from professional journalists that a career in journalism is much more than just a typical 8-hour job.

The 15th Annual Journalism Forum called “Building a Journalism Career in the Digital Age” featured five former Bucks students, each who have gone on to become professional journalists.

“It’s more than a job—it’s a lifestyle,” said Tom Sofield, co-founder, publisher and editor for LevittownNow.com, a statement that became the recurring theme for the forum.

The journalism lifestyle they described involves constantly talking to people in the community and building your sources, seeking out and developing stories, and being prepared at all hours of the day to drop everything to be on the scene of news in the making.

According to Anthony DiMattia, staff writer for the Bucks County Courier Times, it is a job you really have to love because “it never really turns off, you’re always thinking about a story.”

“The thing with community news is talking with your sources, networking, and meeting people every day,” said Sofield, explaining that you’re nothing without your sources.

Sofield explained the value in being prepared for anything, “You might be out to cover a school board meeting, and then end up at a fatal fire.”

In addition to describing the journalism lifestyle, they offered advice to students on how to become a journalist.

Emphasized was the importance of learning as much as you can about every aspect of journalism—from writing, editing, and layout to video and photography.  Learning a lot about media law and proper attribution is especially vital, “especially in this day and age of aggregation,” said Sofield.

Rowan said that freelancing strongly relies on building trust with editors.  “You have to get to know the editor, so they can start to trust you enough to give you assignments.”

According to DiMattia, the key to getting more work is taking every opportunity that comes your way.  “Don’t turn anything down.  If an editor asks you to cover a story, do it.”  Then he added, “Get your facts right.  Use proper AP style.  Always make sure to turn in a clean copy.  Editors like that.”

“I think a lot of people get their jobs through networking.  It’s all about developing a reputation,” said Sofield.

According to Rowan, “If you like it and you’re dedicated, you can absolutely find a niche in it.”