The Real Meaning of “Hillary for America” 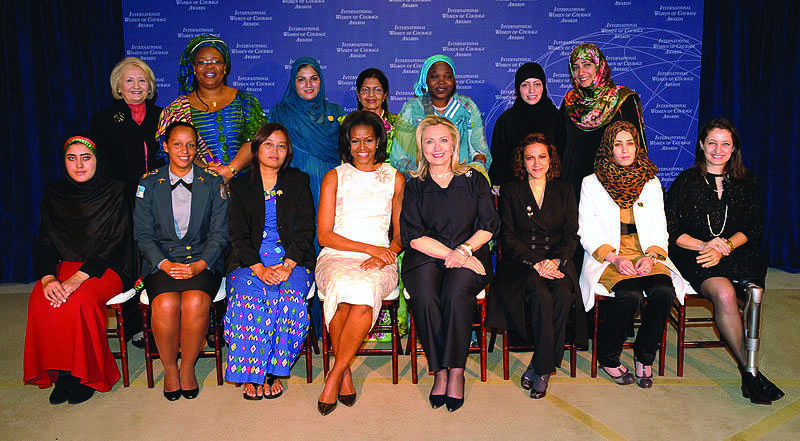 From when the United States elected George Washington as the first president in 1789 to today, a woman has never taken the seat in the Oval Office.
Since the beginning of this great nation, our government has been in the hands of men. However, in this 2016 election, America is on the cusp of achieving a tremendous feat in history.
This unprecedented race has the potential of giving the first woman the position of President of the United States of America, and that woman is Hillary Clinton. All opinions, arguments and biases aside, if Clinton is elected this November, it will be nothing less than a groundbreaking event for America.
Just as Barack Obama made history in 2008 as the first African American president, a Hillary Clinton presidency could possibly be the ultimate breaker of the gender barrier in the United States.
As previously mentioned, the first president was elected in 1789. From that year till 1870, when the 15th Amendment was ratified, only white, property-owning males could cast a vote in elections.
The 15th Amendment stated that the “right of citizens of the United States to vote shall not be denied or abridged by the United States or by any state on account of race, color, or previous condition of servitude.”
It wasn’t until 50 years later in 1920, when the 19th Amendment to the Constitution was ratified, that women were given the right to vote. Since this great achievement of women’s suffrage, strong ladies have been doing all they can to be involved and gain positions of power in the United States government.
12 years after women gained the right to vote, Hattie Wyatt Caraway became the first woman to be elected into the U.S. Senate in 1932. In 1964, Margaret Chase Smith became the first woman to seek the presidential nomination for the Republican Party.
In 1997, Madeleine Albright was sworn in as Secretary of State, thus becoming the highest-ranking woman in the U.S. government. Hillary Clinton is not the first woman to ever dream of becoming president, but she is the only woman who has come this close.
Vice President Joe Biden recently came to Bucks to speak, gathering great crowds at Bucks’ Bristol campus. It was there that I spoke with Barbara Abbott of Southampton and Susan Wolpin of Feasterville, two ladies who had a lot to say about Hillary Clinton’s potential of becoming our nation’s first female president.
“No one has had as much experience as she has. From governor’s wife to First Lady,” said Abbott. “Don’t forget attorney and mommy,” added Wolpin.
Both ladies gushed over Clinton’s experience and her qualifications to become the leader of the country. “After 9/11 as a Senator… she’s had such a myriad of a career,” said Abbott. “But it’s all public service,” she added.
However, it’s no secret that a large majority of Americans are not happy with Clinton’s past which is still being talked about day after day, most notably her email scandal. When Clinton’s controversial past was brought up, Wolpin proudly quoted a meme she found on Facebook, saying, “there’s no such thing as perfect, and normal is only a setting on the dryer.”
Aside from just being enthusiastic about Clinton, Wolpin excitedly told me about an organization that is paving a path for all women to get involved in government. It’s called Emerge America, and it focuses on inspiring democratic women to run for public office. Since its launch in 2002, Emerge America has helped train over 2,000 women to run for office, the website boasts.
Efforts like this one, plus the prospect of Hillary Clinton winning this presidency are gigantic leaps in the fight for gender equality. Maybe Clinton isn’t a favorite for all Americans, but unfortunately, this problem occurs on both sides of the ballot.
Regardless of political stances and views, this period in America is no doubt a catalyst that will continue opening doors for people of all walks of life, and America electing its first female president is a triumph that cannot be ignored.